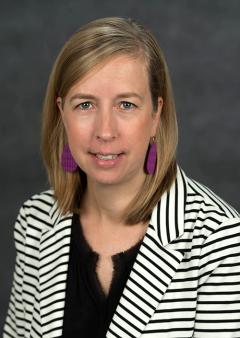 Penny Gros has been the executive principal for Region 2 since 2018.

Ms. Gros began her career in Fairfax County as a Spanish teacher.  She taught Spanish at the secondary level and also worked as a Spanish Immersion teacher at the elementary level.  Upon graduating from the University of Virginia, Ms. Gros spent two years as a bilingual elementary teacher in the Houston Independent School District while working with the Teach for America program.  She has dedicated her career to working with students of all levels - elementary, middle, and high – and firmly believes that all children can flourish and learn if given the opportunity and given the proper support.

Ms. Gros has worked extensively with schools and in schools with high percentages of English Language Learners.  She has a proven track record of increasing student achievement, as well as achieving full accreditation in schools that had previously been given warnings by the state.  Ms. Gros is also a leader of the Positivity Project within FCPS.  She subscribes to the Project’s core belief that relationships are the cornerstone of health, happiness, and resilience and she has made it a priority at Stuart to inspire students to build positive relationships with other students, as well as the staff and the community.

Ms. Gros holds two Bachelor of Arts degrees from the University of Virginia, in Spanish and English.  She has also attained a Master of Education degree in Leadership & Policy Studies from Virginia Tech.