It’s a typical night for the Reiley household as the sun goes down in Springfield: dinner, homework, and viola practice for 10-year-old Caeden, who is learning his new instrument at Saratoga Elementary School. But he’s not the only one who has to sit down and practice tonight. Caeden’s parents, Karen and Matthew, must also find a few minutes to pull out their instruments and get to work. Like his son, Matthew is learning the viola. Karen is a first time cello player. With three new learners, the Reiley home is often filled with the sound of strings.

“I didn’t have an orchestra in high school,” says Karen. “So when I heard about the opportunity with the Parent Orchestra, my husband and I knew right away we wanted to sign up.”

The Reileys are just two of about 100 parents who gather every other Tuesday at Annandale High School to practice and prepare for the upcoming end-of-year FCPS Parent Orchestra performance. The group is free to join, and open to all experience levels. Karen comes from a musical background, having played the flute and piano, but it’s her first time learning a string instrument, and it hasn’t been easy.

“It can be frustrating learning a new instrument at any age,” Karen said. “So we’re all able to share that frustration together. It’s a chance for us to grow as a family.” 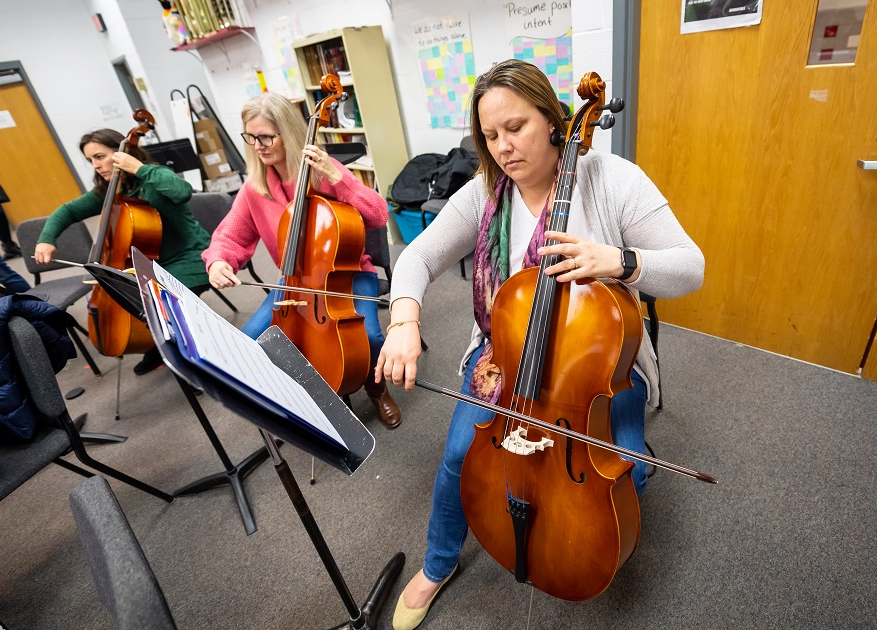 The Parent Orchestra is the brainchild of Annandale High School orchestra teacher Annie Ray, who started the group four years ago. It’s grown every year, and it’s now so popular there’s a waitlist to join. Ray says the demand is high because parents are often stumped when a child brings home a new instrument.

“Parents are able to help with math homework, with English and science, because they went through it in school,” said Ray. “But for many parents, they have not had music educational experience. They don’t know what to do when their students bring home their strings. It really helps the parents understand students' frustrations, what practice looks like, and what the end goals are.”

When parents sign up, they are assigned a group based on their experience level. Many have never played an instrument before, so they’re learning the basics of reading music, tuning an instrument, and following a conductor.

“It’s like watching them become kids again,” Ray continues. “It takes a lot of bravery to be vulnerable and learn something new and to not be good at it.”

After years of playing the flute and oboe, John Fahey got a violin during the pandemic to fill the time when things were shut down. His 9-year-old son is learning the cello at Cardinal Forest Elementary. Fahey says he tries to practice about 20 minutes a day, and hopes to become skilled enough to play in local ensembles.

“It’s been great to learn along with my son. We’re able to commiserate and compare notes.” Fahey says, laughing.

Parent Orchestra doesn’t just bring families closer - but Ray says it’s also an opportunity for parents from across Fairfax County to meet each other and create new friendships.

“Playing music together is all about forming a community,” she said. “During the shutdown I would get pictures of the parents sitting in a huge circle in a parking lot, six feet apart, but still playing music and connecting with each other. Music never stops. It connects us all.”

With just weeks to go until their May 19 performance, the parents are hard at work perfecting their pieces. Karen knows she still has a long way to go, but says the most rewarding moments are those spent learning a new skill, side by side with loved ones. She remembers one recent weekend her family sat down and played music together.

“It was so fun that we did it for hours and forced ourselves to stop only because our fingers and arms couldn't take anymore,” she shared. “Caeden had some tearful moments at the beginning in which he felt very incapable, but he was able to observe us laughing at ourselves and just trying our best, and learn by example that making bad sounds on an instrument is just part of growth. Those kinds of moments make learning something new worth it!”