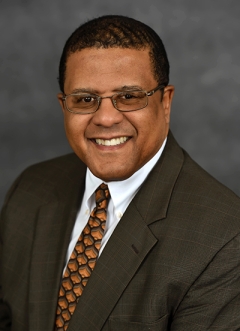 Never underestimate the power of dreams and the influence of the human spirit. We are all the same in this notion: The potential for greatness lives within each of us. Enthusiasm is contagious and so is the lack of it.

Since 2014, Tyson has been Region 1 assistant superintendent, where he currently supports 40 schools and principals.

Prior to his time with FCPS, Tyson was an award-winning teacher of chemistry and mathematics at Benjamin Banneker Academic High School and subsequently led the Thurgood Marshall Charter School, both in Washington, D.C.

In 2004, Tyson joined FCPS as assistant principal at Thomas Jefferson High School for Science and Technology (TJHSST), where he supervised the science and technology division. He became subschool principal at South Lakes High School in 2007, with oversight for instruction and the development of a positive learning environment for ninth and tenth grade students. In 2009, Tyson was named principal at Kilmer Middle School, and became Cluster 3 assistant superintendent in 2013 with responsibility for 26 schools and principals.

Tyson participated in the LEAD Fairfax Aspiring Principal cohort, and is the past president of Phi Delta Kappa. He is a member of the Minority Student Achievement Oversight Committee, and has given numerous presentations and interviews on mathematics and science instruction, teaching, and supporting African American students. He has served as an advisor and consultant to the U.S. Department of Education, the National Endowment for the Arts, Georgetown University Medical Center, and the National Science Foundation. Tyson has been named a Washingtonian of the Year. He is a member of the Class of 2015 for Leadership Fairfax.

Tyson is an alumnus of Dartmouth College and did his graduate work at Yale University and George Washington University.