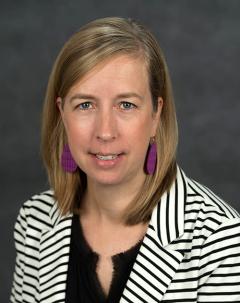 Penny Gros became assistant superintendent for Region 4 in July 2021. She was previously an executive principal for school improvement in Region 2.

Gros began her career in FCPS as a Spanish  immersion teacher at Ravensworth Elementary. She taught Spanish at Hayfield Secondary, and was promoted to assistant principal of Robinson Secondary. In 2006, she was appointed principal of Key Middle School and, in 2013, moved into the role of principal of Glasgow Middle. Two years later, she became principal of Justice High, where more than 2,000 students are from more than 70 countries and speak 50 languages. Before moving to the Region 2 Office, Gros was appointed to serve as interim principal of Lake Braddock Secondary.