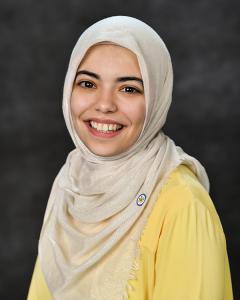 Hi there! Thank you for visiting my page. Let me know how I can serve you—in all the ways I can, I look forward to being there for your family!

Entering her term with over 160,000 county votes and as the youngest ever elected into this role, Abrar Omeish was sworn into office as an At-Large School Board Member on December 12, 2019. Her term expires in 2023.

Omeish is one of three at-large members on the Fairfax County School Board, representing the county's 1.2 million residents from all nine districts.

Omeish has been an advocate for equity to ensure that every child, no matter what background they come from and what identities they represent, has the full opportunity to achieve their potential and become successful. She believes in the importance of holistic education-- a framework that looks at the well-being of a child not only academically but also socioemotionally, mentally, intellectually, physically, spiritually, morally, and civicly. She aims to advocate for students, staff, neighboring residents, and the surrounding environment to build compassionate nurturing environments for the whole community.

In working to empower the #leaderineverychild, Omeish seeks to elevate the voices of all Fairfax residents, particularly student voices and the perspectives of those who have not been heard. She aims to be an accessible public servant and hopes to prioritize others through proactive engagement, availability, and innovative forms of communication.

Omeish holds a double bachelor's degree with honors from Yale University and is currently pursuing a joint JD/MPP degree at Georgetown University as a Blume Law Center fellow. Prior to her enrollment, she worked with many county families facing deportation and family separation at a human rights and immigration law firm. Omeish brings skills and experiences from over ten years of service to FCPS in many capacities. Omeish served as co-chair of the Human Resources Advisory Committee for the School Board where she served for two years and has previously served on the Superintendent Selection Advisory Committee, the Advanced Academics Advisory Committee, and the Ad Hoc Student Discipline Advisory Committee.

Omeish co-founded GIVE, a youth-led, youth-run non-profit organization that has been providing thousands of youth across Northern Virginia, especially those who are underprivileged, with free tutoring and mentorship services in 20 locations over the past 10 years. She previously worked in the FCPS Office of the Superintendent and prior had led a campaign to amend the bullying policy for the school system. Omeish has also been a substitute teacher for the school system.

Omeish is a proud second-generation product of our school system where she pursued the International Baccalaureate diploma at Robinson Secondary School and graduated from Frost Middle School and Mantua Elementary School. She was also a member of our county's Girl Scout troops where she earned her Gold Award and currently serves as a mentor and advisor. Her many aunts and uncles as well as her father and siblings graduated from FCPS schools. She remains active in the schooling of her youngest sibling who is a current FCPS high school student and is a mentor to hundreds of youth across the county.

Want to receive newsletters and other news from Abrar Omeish in your mailbox?  Sign up here for her News You Choose messages