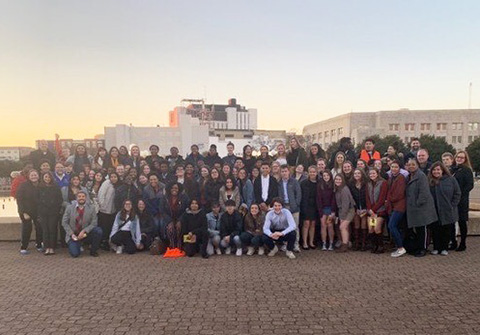 Maren Hoover, a veteran West Potomac High history teacher, along with Mount Vernon teachers Alicia St. Jean and Benjamin Correia, led a field trip for 104 U.S. History students, many of who had never seen a live professional performance before, to see Hamilton in Norfolk just before winter break. “Watching so many [students] have their first theater experience was the most special part of the day,” tweeted Janet Babic, West Potomac’s school-based technology specialist and one of 10 chaperones on the trip. Prior to the field trip, participants had to complete a project-based learning (PBL) activity connecting a theme from Hamilton to their lives. The day began with an exposition of student performers sharing their projects followed by a question-and-answer session with Hamilton actors; the culmination of the day was viewing the matinee show of Hamilton. “Creating a project based on history and then watching successful interpretations of that allowed me to understand the importance of retelling history in different and unique ways,” said student Julie Wu. “As a student and a performer, Hamilton gave me an opportunity I wouldn’t have had by reading a textbook and deepened my knowledge of history and the ways that history can be retold.” The West Potomac PTSA supported the student trip and kept fees down by paying for the transportation. Several members of the community donated to ensure all the students selected by lottery were able to attend regardless of their financial situation. West Potomac student Julie Wu wrote an essay about the experience (see below). Contact Kerry Cooper at klcooper@fcps.edu.

My Hamilton Experience  by Julie Wu

As an active performer in musical theater, I loved creating a project that was based on the history of the American Revolution in the form of a performance. The project allowed me to grasp what it was like for the historians and writers of Hamilton to create an accurate interpretation of the time period while creating an entertaining story for their audience. While watching Hamilton, I was able to make the crucial connections of what I was watching to what I had learned in class. For example, we learned about the basic outlines of the people from history, but the play showed me the intricate details of their relationships. My favorite song of the play was “What’d I Miss” which was sung by Thomas Jefferson after he returned from France. Songs like these created a deeper understanding and knowledge of history that I couldn’t have gotten from my history class; I wouldn’t have known that Jefferson was ridiculed by Hamilton for leaving his country to go and galavant with the French from reading a textbook. While it was rough to wake up around 5 a.m., I enjoyed meeting new kids on the bus ride who enjoyed Hamilton just as much as I did. Every new face that I met was so excited to go to Norfolk and watch the show they have been listening to for years. My fellow theater friends were even more excited to see what a touring cast looked like compared to a Broadway cast. The student performances enhanced my knowledge of just how talented and brave kids my age are. So many performances were solos and duets; there was even one performance that was a duel between Hamilton and Burr using colored flags! Creating a project based on history and then watching a successful interpretation of that allowed me to understand the importance of retelling history in different and unique ways. As a student and a performer, Hamilton gave me an opportunity I wouldn’t have had by reading a textbook and deepened my knowledge of history and the ways that history can be retold.