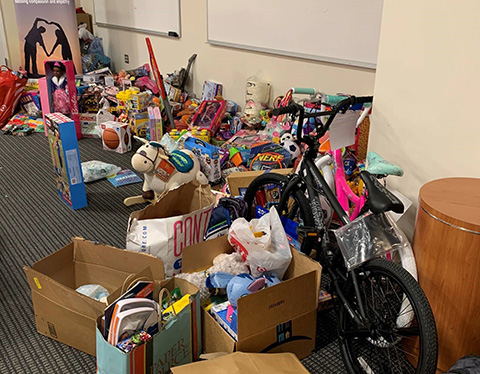 South Lakes High senior Amanda Smith decided to plan a toy drive through her school’s chapter of the National Honor Society (NHS) to give students an opportunity to volunteer and donate this holiday season. Smith stated that donated items would go to a Touching Heart event called Santa’s Workshop, where they would be wrapped by volunteers and given to foster children. She said it was hard to gauge how much the community would engage with this project because she planned the donation from her laptop at home with a goal of 100 toys. On the first day, donations exceeded 100 toys. The second collection—that took place one week later—was even more successful. Smith extended special thanks to assistant principal Richard Deivert, NHS administrator, who donated toys and two bicycles. With the help of her parents, neighbors, NHS volunteers, and NHS supervisor Christopher Moorhead, the nearly 500 donated toys were transported to Arlington for Santa’s Workshop. Contact news liaison Emily Burrell at ecburrell@fcps.edu.