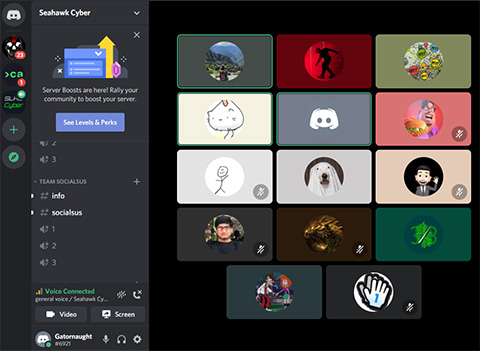 South Lakes High students in the Seahawk Cyber club met with the chief executive officer of Light Rider, Inc., the first U.S. company to provide Li-Fi networking technology communication in this area. Li-Fi is a wireless communication technology that uses light instead of radio waves to transmit data and position between devices. According to club sponsor Selwyn Lawrence, Li-Fi has some potential advantages to Wi-Fi because the communication cannot go through walls, so a hacker who is not physically present in the room cannot capture the data. It also has roughly 10,000 times the bandwidth of Wi-Fi so it can support many users sending or receiving very high bandwidth transmissions in the same room simultaneously. Students asked questions regarding cybersecurity from one of U.S. first cyber warriors: Tony Lawrence, chief executive officer of Light Rider, who shared his entry into the cyber field via the U.S. Army and work with the National Security Agency. Seahawk Cyber members received a quantum chip and Li-Fi light bulbs from Light Rider and will now be able to run very fast and secure programs using this device. The award-winning, student-led Seahawk Cyber club has five teams that recently competed in the U.S. Air Force Association’s CyberPatriot Defense competition. One of the teams—Team Zero Day—is ranked third in the state and 32nd out of 2,600 teams in the country and abroad. Every year club members compete in the annual CyberPatriot competition, in which competitors are challenged to secure a variety of systems in a simulated corporate environment. This competition prepares students who are interested in careers in cybersecurity and provides valuable hands-on experience as well as promoting general technical and solution-oriented mindsets. Club members have been working on creating scripts for competition and as part of the International Baccalaureate (IB) Middle Years Program. Club members also created a webpage, a discord server, and a club server. Contact Selwyn Lawrence at slawrence@fcps.edu.