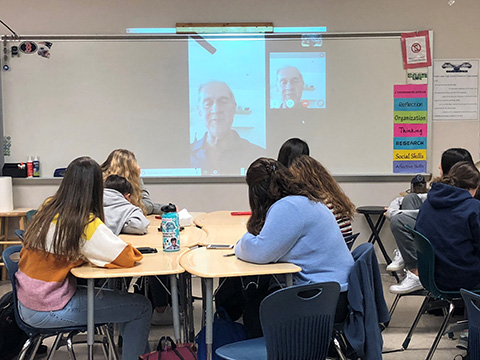 As part of the International Baccalaureate (IB) History World Topics unit on the Development of Democratic States, students at South Lakes High Skyped with Roelf Meyer, who served as the chief negotiator for the apartheid government in South Africa during that country’s transition from apartheid to democracy.  He also served as a member of the South African Parliament, and on the drafting committee of the South African constitution.  Speaking from South Africa, Meyer answered student questions about the challenges his country faced during the transition from apartheid, what it was like to help organize the country’s first democratic election, and the legacies of apartheid.  Students were excited to speak with an influential figure who was an eyewitness to history, and Meyer said he was impressed with the students’ knowledge of South African history.  IB History World Topics teachers Meghan Cycyk, Joel Adams, and Kim Moore came up with the lesson to end the first semester. Contact Meghan Cycyk at mecycyk@fcps.edu.