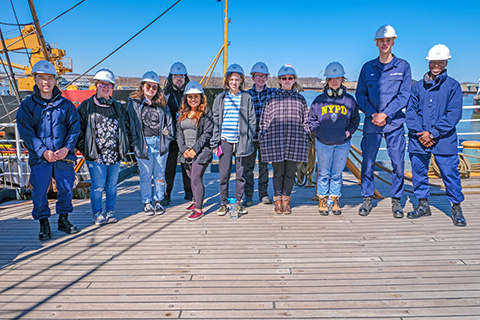 Students at Quander Road School got a close-up look at the U.S. Coast Guard Cutter (USCGC) EAGLE, also known as the Barque EAGLE. Coast Guard personnel gave students a tour of the vessel, including places that are not normally available to the general public, including the wardroom, berthing areas, and the engine room.  Students learned about the cutter’s history and transition from the German vessel Horst Wessel to the USG Eagle after World War II.  Its primary mission is to train future Coast Guard officers. One student in particular was very interested in the Cutter’s operation, he asked questions about the operations of some of the Cutter’s yardarms and why they are not modernized using current technology. The staff told him that theykeep certain aspects of the cutter the way they are because of tradition. He was particularly interested in the ceremonial sabers in the wardroom. Students also asked about the cutter’s propulsion system, and top speed with sails and with just the engine. They asked for clarification whenever they heard new terms, asking about the difference between knot, nautical mile, and miles per hour. The commitment and partnership between the Coast Guard and Quander Road School demonstrates the willingness to work together to achieve the mutual goals of elevating the quality of education and life for Quander Road School students and to provide them with increased educational opportunities through visits to local Coast Guard units. Contact news liaison George Deneault at gvdeneault@fcps.edu.