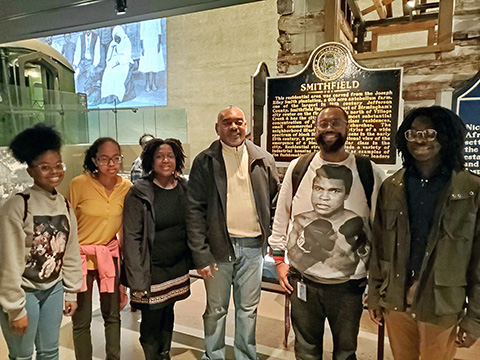 In honor of Black History Month, Marshall High’s Black Student Union (BSU) Club visited the National Museum of African American History and Culture in Washington, D.C.  Students started the tour on the first level of the museum which focuses on Slavery and Freedom 1400-1877, offering historical events in chronological order. Then, they explored the next levels, Defending Freedom, Defining Freedom: The Era of Segregation 1876-1968, and A Changing of America: 1968 and Beyond. The students also viewed other exhibits including the Emmitt Till Memorial and the Green Book. During the visit, students and staff were honored to meet Mark Pettway, the first African American Sheriff of Jefferson County in Birmingham, Ala., who was visiting with his family. Pettway invited the Marshall students to visit any time to see the jail where Martin Luther King, Jr., was held. The National Museum of African American History and Culture is the only national museum devoted exclusively to the documentation of African American life, history, and culture. It was established by Act of Congress in 2003, following decades of efforts to promote and highlight the contributions of African Americans. To date, the Museum has collected more than 36,000 artifacts and nearly 100,000 individuals have become members. The Museum opened to the public on September 24, 2016, as the nineteenth and newest museum of the Smithsonian Institution. Contact Tellas Minor at tlminor@fcps.edu or Clarence Washington crwashington@fcps.edu.