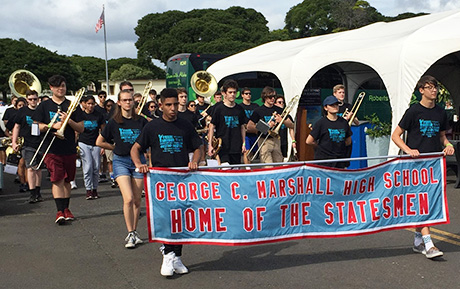 Marshall High’s marching band—the Marching Statesmen—participated in the Pearl Harbor Day Memorial Parade in downtown Waikiki, Oahu, Hawaii, in memory of the 78th anniversary of the attack on Pearl Harbor that catapulted America into World War II.  Students heard from a survivor of the attack, who is now 100 years old. They visited the U.S.S. Arizona Memorial, where they stood overtop a ship sunk in the attack, and toured and performed at the U.S.S. Missouri, where the Japanese surrendered in 1945. The Marshall student musicians increased their global awareness by visiting the Polynesian Cultural Center to understand the culture of Hawaii and other Pacific islands, hiked up the Diamond Head volcano, and took a bus tour around the island of Oahu. Contact Paul Vesilind at pjvesilind@fcps.edu or Kelly Sund at kgsund@fcps.edu.