Fairfax County Public Schools is First in the Nation to Rename a High School in Honor of John R. Lewis, During Ceremony Attended by Senator Tim Kaine

John R. Lewis High School in Springfield, Virginia, today became the first high school in the nation to be named in honor of the late civil rights icon and congressman.

Speaking at the ceremony, Superintendent Brabrand said, “This is an historic day for our school division and our community. This is a moment when we can reflect on our past and look to our future while we continue our important work around equity and anti-racism.” 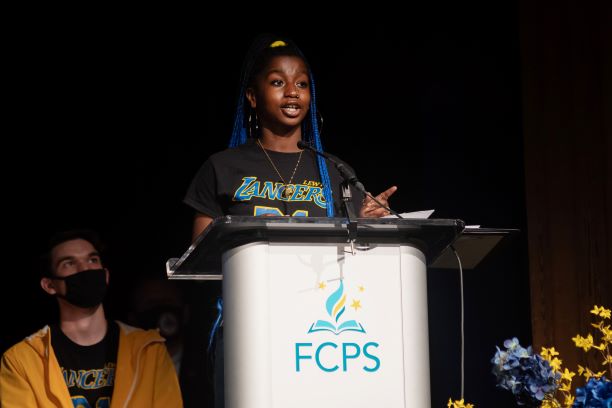 Lewis dedicated his life to fighting for the rights of all Americans in addition to advocating for gun control, voting rights, health care reform, and immigration during his 17 terms serving as a Democratic congressman in Georgia.

As a young man, he survived a brutal beating by police during a landmark 1965 march in Selma and became known for his philosophy of “good trouble” activism. Lewis died last July at 80 years old following a battle with pancreatic cancer.

Members of his family were able to watch today’s ceremony virtually and his youngest brother, Henry Lewis, sent a video message on behalf of his family.

In it, he said, “He (Lewis) had a vision, and he lived that vision out. Thank you all so much for naming a school after him and keeping his memory alive.”

View the remarks of Henry Lewis, the youngest brother of Congressman John Lewis.

The school, which opened its doors in 1958, now has students who represent 61 different countries and 25 languages and offers the International Baccalaureate (IB) program to its students.

School Board member representing the Lee District, Tamara Derenak Kaufax, said, “As a civil rights icon, a congressman, and a passionate leader—John Robert Lewis’ voice and his example for living are needed today more than ever.” 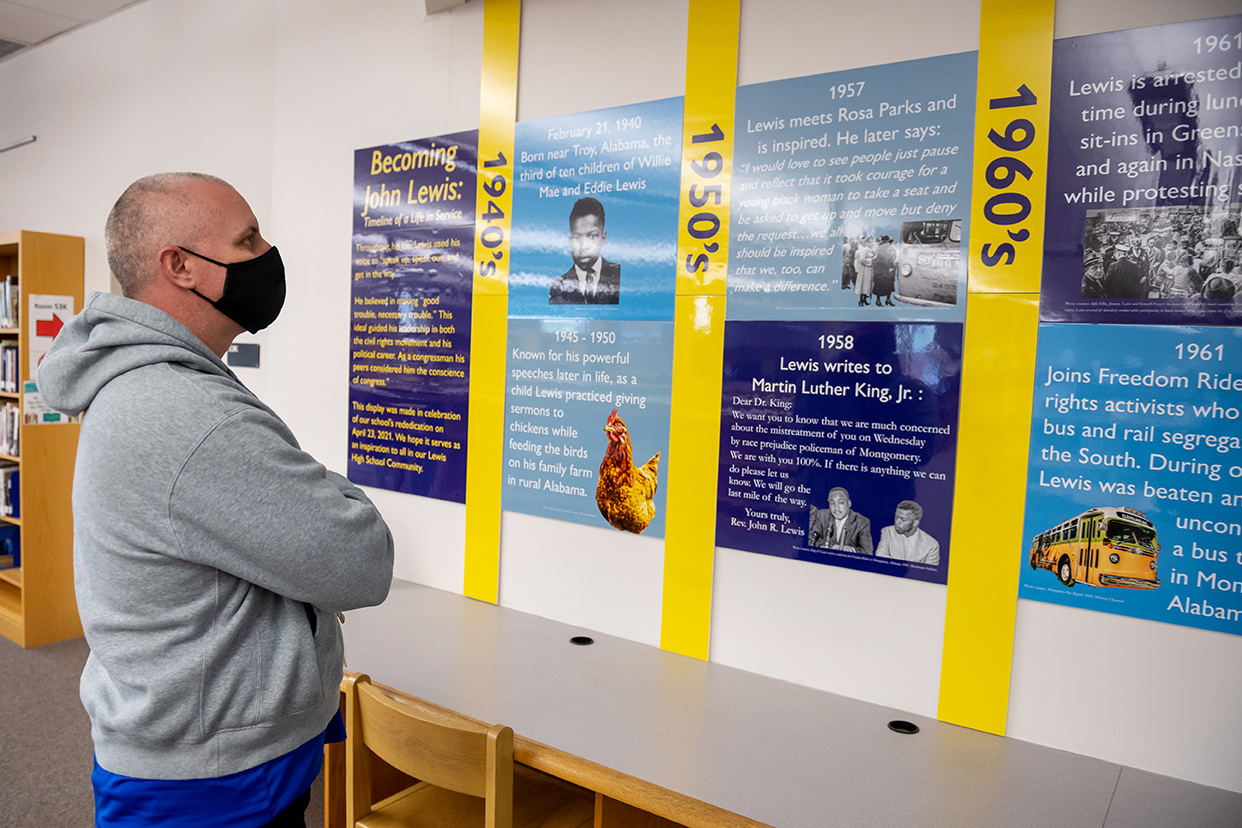 The two-hour long ceremony opened with a rendition of “The Star Spangled Banner” performed by Lewis junior, Nazmee Kamal, and also included a musical arrangement by the school’s Performing Arts Department of  “Lift Every Voice and Sing.”

School Board member at-large Karen Keys-Gamarra told the audience, “When John Lewis crossed the bridge at Selma, he did it so that we could all learn to see the humanity of our neighbors and to abolish the hatred that could cause blindness in this nation.”

A recording of “John Lewis Lives”, an original song written and performed by Alan Scott and Ruben Studdard, was played. In addition, seven students shared their voices about what it means to become John R. Lewis. 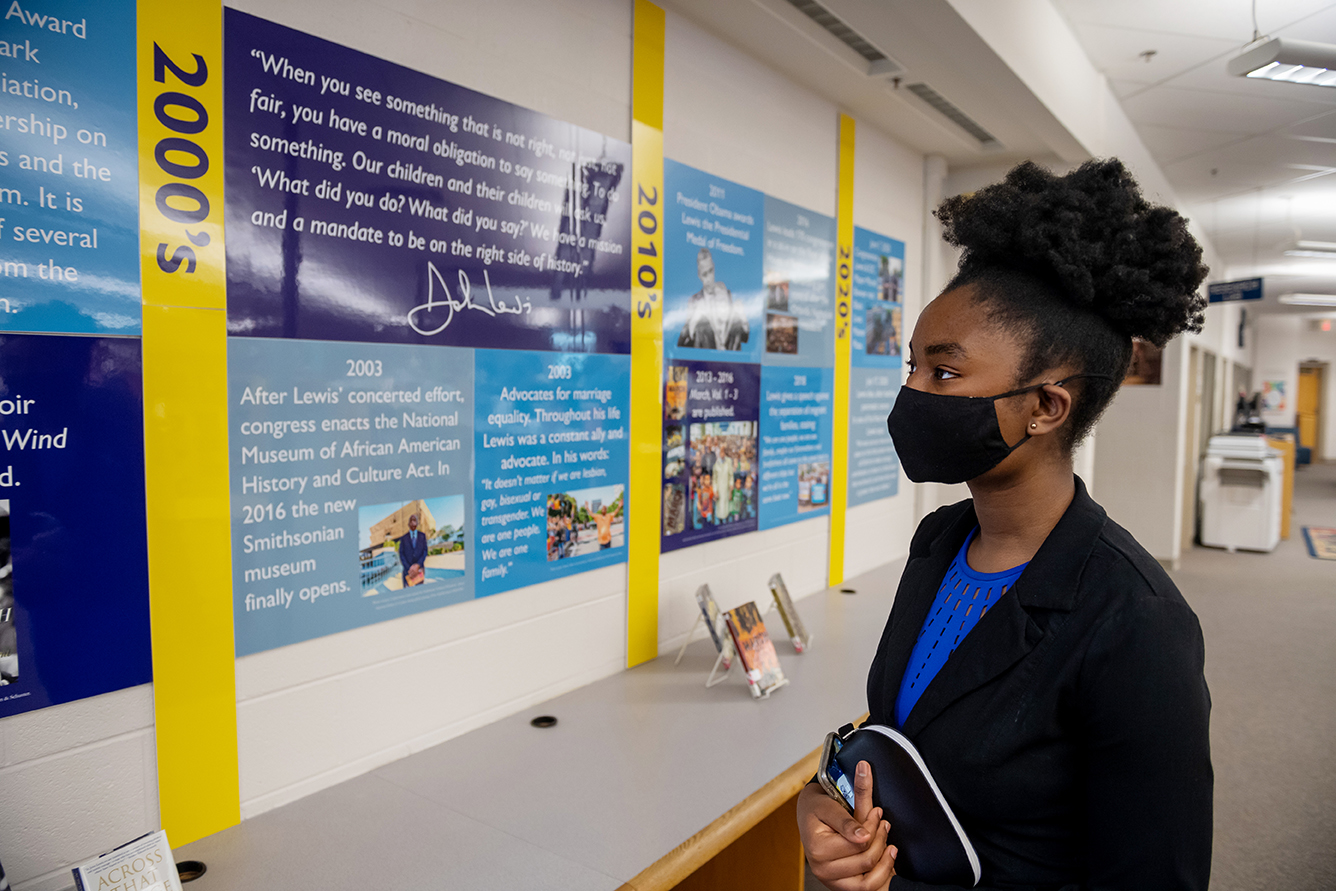 View the student tributes to John R. Lewis from the ceremony.

School Board Chair and Mason District member Dr. Ricardy Anderson took a moment to reflect on the fact the significance of the renaming even resulted in a question on Jeopardy this week: The show asked contestants, “In 2020, Robert E. Lee High School in Springfield, Virginia was renamed for this late Congressman and civil rights icon.”

“Who is John R. Lewis?” Dr. Anderson asked. “First and foremost, he was a champion for the marginalized. He was a courageous leader dedicated to challenging injustice and inspiring hope,” she said.

Additional photos from the event are available.