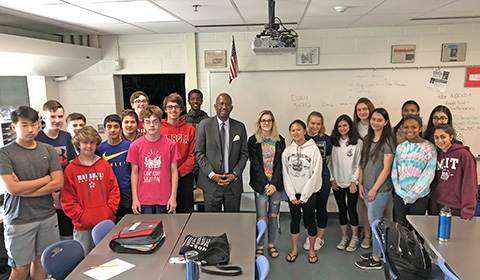 ABC News senior justice correspondent Pierre Thomas visited journalism classes at Marshall High to discuss his career and the state of journalism in today’s society. Thomas, who is the parent of a Marshall student, works as a correspondent for World News Tonight with David Muir, Good Morning America, and Nightline, among others. He fielded questions from journalism students for 90 minutes, sharing stories about his experiences covering important historical events such as the Boston Marathon bombing and the recent release of the Justice Department’s “Mueller report” on potential Russian interference during the 2016 Presidential election. Thomas said one of the most memorable and emotional stories of his career was covering the 9/11 terrorist attacks, where he served as a primary correspondent alongside ABC anchor Peter Jennings reporting news that day as it unfolded. He also addressed the recent controversy surrounding “fake news” in the media, saying most professional journalists go to work each day with the intent to report the facts of issues in an objective way. He encouraged students to evaluate the sources of their information and determine whether they are reliable before forming opinions. Sophomore journalism student Nhu-Lan Pho said her biggest takeaway from Thomas’ visit was how he was able to make his experience relevant to the student audience’s lives. “He connected the things he learned in his career to us,” Pho said. “He presented things that could help us become better writers, readers, listeners, and reporters.” Contact Sam Hedenberg at sehedenberg@fcps.edu.