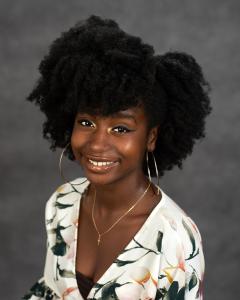 Ms. Boateng aims to focus on implicit bias awareness, the dress code, assistance for at-risk students, drug use prevention, discipline reform, and to continue the work of the previous representative Benjamin Tignor on mental health. Discipline reform is important, according to Boateng, “because it merges with at-risk students and implicit bias.  One can see, from not only real life but also studies, that suspending or expelling students hasn’t been effective.” She adds that different solutions should be explored to help students who have been disciplined. “I believe that schools are meant to form students into productive citizens of society. Using suspension and expulsion as a first option in a way gives up on the child. Giving up, I feel, is the worst thing a school could do to a child. I want to work with the School Board to make sure we aren’t giving up on children” she states.

Boateng has attended seven schools in her academic career, six of which have been within FCPS. Since seventh grade, Boateng has attended Twain Middle, South County Middle, South County High, and Lee High. She believes her exposure to many schools in Fairfax County has helped her see what FCPS “really encapsulates” and she intends to use that insight in her one year tenure.

As a recipient of the Johns Hopkins Center for Talented Youth scholarship worth $25,000, Kimberly receives ongoing mentorship and has participated in three-week summer sessions at various colleges. Kimberly studied Foundation for Psychology at Lafayette College and Principles of Engineering at Roger Williams University and studied Global Politics at Princeton University this past summer. In addition, Kimberly participated in Virginia Tech’s VALHEN program for 3 days this past summer. She also was a part of Edu-Futuro’s Emerging Leaders Program in the spring of her sophomore year and stayed at the University of Virginia for the Juntos Podemos program.

Boateng hopes that she can somehow increase a feeling of efficacy among students. She states “I want students to start speaking up again about things that bother them and better yet, I want them to feel like they’re being listened to.” She stresses the need for more access points to the School Board and hopes she can use her position to encourage more students to reach out about issues that are important to them.