“We Became Best Friends Right Away”: Two Outstanding New Teacher Honorees Reflect on Friendship Since College and Path Back to FCPS

When Shelby Press and Amelia Carr walked into their first ever college class at 9 a.m. Monday morning of their freshman fall semester, little did they know they were about to embark on a lasting friendship.

As they began talking, they realized they had a lot in common. They had both played field hockey, they both wanted to be teachers, and they graduated from rival schools in Fairfax County: Edison High School and Hayfield Secondary School. The two became so close over the next few months, they decided to become roommates their sophomore year. The pair pursued the same path at the University of Mary Washington, both earning their Masters in Education.

“I think you could hear us outside Jiffy Lube Arena where the awards were held. We were cheering so loud,” Press said about watching her friend win the award. “The excitement was so powerful. And then she got to go back to school and tell her students. That was the most special I think.”

“I was bawling! It was really special,” Carr said, describing the moment she watched her friend win the same award one year later. “I wasn’t surprised Shelby got it. I live with her and I see how hard she works on a daily basis. We both come home late all the time and work so hard. We’ve known each other since we were 18 and we’ve both wanted to be teachers the entire time. It’s really nice for Shelby to be honored for all her hard work.”

Both Press and Carr were set to walk across the stage to graduate from their master’s program in the spring of 2020, but that ceremony was canceled due to the COVID-19 pandemic. Months later, the two started their teaching careers at FCPS, both having to navigate virtual instruction as the pandemic raged on. Through all the challenges, they leaned on one another for support and encouragement.

“That was a really hard time. I’m so thankful we had each other. It was very helpful,” Press said.

Now both women have two years of teaching under their belt, and they’re excited to continue their work with students in the same community that raised them.

“We both really care about our community. Especially since we were born here and went to these schools and our family is here. That adds an extra piece to it,” Press said.

Amelia added, “We know how important it is to make sure students know they matter. We are both really silly and love to have fun. I love teaching because kids are the best. They bring us so much joy. We’re really lucky.” 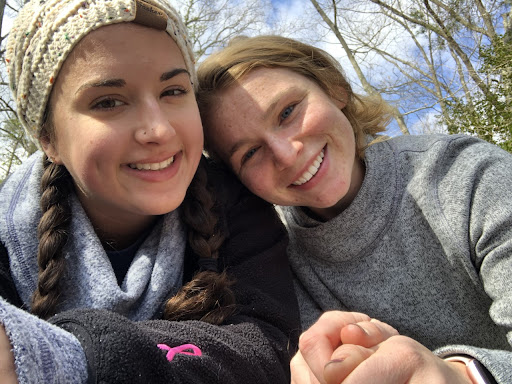 The Outstanding New Teacher award is given annually to a teacher in their first three years of teaching. Read more about this year’s FCPS Honors recipients.

If you are interested in becoming a teacher with FCPS, visit the Recruitment Services page to learn more.