For an extensive look at the contributions of Black Americans, you only have to travel as far as West Potomac High School.  The hallways outside Lawrence Cooper’s classroom at West Potomac are filled with memorabilia of Black historical figures, the result of Cooper’s 22-year collection of everything from vintage postcards to simulations of vinyl records.

Cooper, a special education teacher, shares his personal collection during February—Black History Month—with students and colleagues at the school. He says the display has sparked numerous conversations about the contributions of Black Americans. “I have received extremely positive and supportive feedback from everyone who has visited,” says Cooper. “Teachers have brought their classes down to study and learn. Individual students spend their time here as well. It has been a great cultural awareness talking piece and has sparked many ideas and future project collaborations between staff and their academic disciplines.”

Cooper began his collection with vintage postcards of musical artists, which he found at the now-defunct Tower Records in 1998. He used Print Artist 15.0 to create simulations of vinyl records by Black-owned or Black-supported music labels; the “records” provide an upper border for the displays.

Among the news clips, posters, and videos on display, Cooper says two items “are particularly special to me. The first is the vintage 1955 reissue of the Montgomery Adviser newspaper coverage of the Montgomery Bus Boycott.” He adds that the reissue came from a project that Target spearheaded and sent to school districts in the early 2000s.  “The second one is the pair of collages featuring Black sculptors, cartoonists, painters, illustrators, comic book/strip artists, muralists, engravers, potters, photographers, graphic artists, and collage makers,” explains Cooper. “I have also been dubbed a collage maker and proudly so.”

Cooper is also a musician and has several photos with and autographs of Black musical artists.

His extensive collection of Black memorabilia lines the hallway outside his classroom on both sides as well as on the adjacent wall facing his room and provides a way for students to learn about and discuss the many contributions of Black Americans. 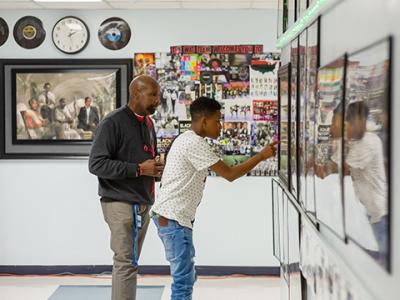 Mr. Cooper answers a student's question about his display of famous Black Americans.

Mr. Cooper answers a student's question about his display of famous Black Americans. 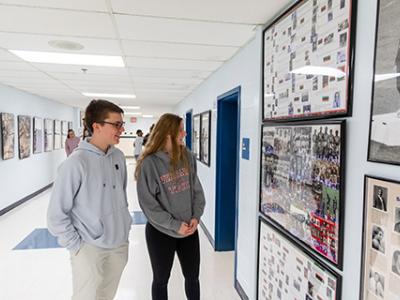 Students look closely at a display of athletes.

Students look closely at a display of athletes. 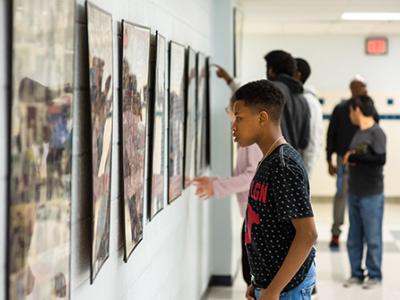 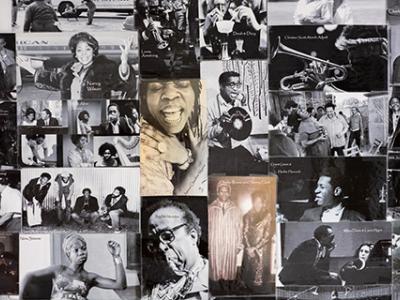 A closeup of famous Black singers

A closeup of famous Black singers 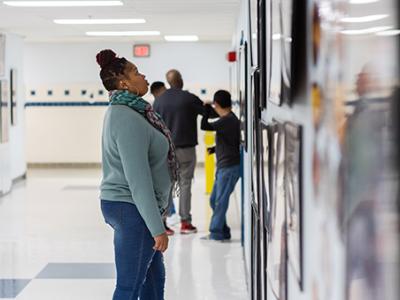 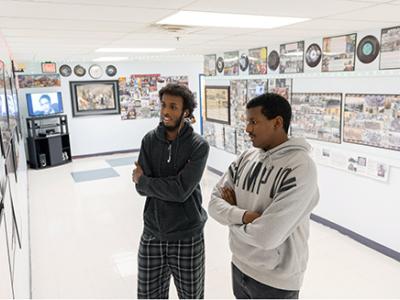 When a PAWS class at Kilmer Middle decided to give back to the community this year, they chose to do a service project as a group while giving a disposable item a new purpose.

Students from the Davis Center are chopping, squeezing, and dusting their way through the holidays thanks to a new employment partnership with the Hyatt Regency Tysons Corner this year.