Lake Braddock Student Wins a Contest That’s Out of This World! 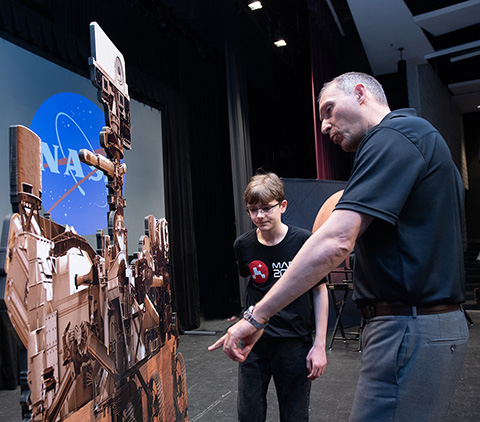 Lake Braddock middle schoolers filled the auditorium as the surprise announcement was aired live from NASA in California.

Thomas  Zurbuchen, associate administrator for the science mission directorate at NASA headquarters in Washington, D.C., says, “Curiosity is always a part of exploration, but the flip side of curiosity is perseverance. Perseverance and curiosity are what exploration is all about.” So it was Alex’s entry along with his essay, which he read aloud, that won the main prize.

As the winner, Alex is invited to view the spacecraft launch live on July 17 from Cape Canaveral Air Force Station in Florida.

Alex’s mother, Erin, saw the contest come across the NASA.gov feed and asked if he’d be interested. He says, “Once I saw the article announcing the contest, I was so excited that not doing was not an option!” He is so inspired he feels, “I’m part of a NASA mission that is beneficial to science and space exploration.”

Sister Kyra (a Sangster ES student) boasts, “I’m really proud of my brother. He did an amazing thing!”

Alex credits his parents for sending him to space camp for his eleventh birthday. “Once I arrived, I already knew what I was going to do for the rest of my life.”

His goals are to get his high school diploma, go to college and major in engineering or space engineering, and then work at NASA. His winning essay can be seen below.

FCPS Superintendent Scott S. Brabrand addressed Alex and the students and stated, “This school is planting the seed in you. This school will have a lasting presence in space.” 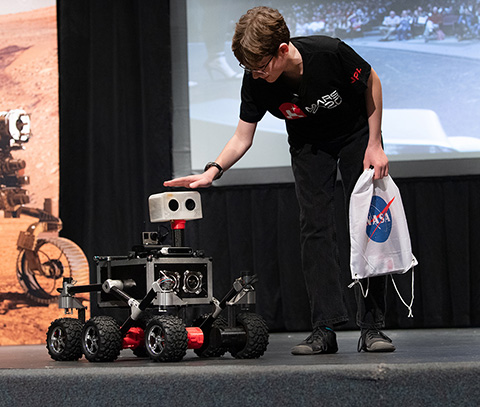 Perseverance will launch on July 17 and is expected to land on Mars on February 18, 2021. According to NASA, it is the first mission to get samples of the planet and bring them back to Earth.

The naming contest partnership is part of a Space Act Agreement in educational and public outreach efforts between NASA; Battelle of Columbus, Ohio; and Future Engineers. Amazon Web Services is a prize provider for the Mars 2020 naming contest.

"This naming contest is a wonderful opportunity for our nation's youth to get involved with NASA's Moon to Mars missions," said NASA administrator Jim Bridenstine. "It is an exciting way to engage with a rover that will likely serve as the first leg of a Mars sample return campaign, collecting and caching core samples from the Martian surface for scientists here on Earth to study for the first time."

Curiosity. InSight. Spirit. Opportunity. If you think about it, all of these names of past Mars rovers are qualities we possess as humans. We are always curious, and seek opportunity. We have the spirit and insight to explore the Moon, Mars, and beyond. But, if rovers are to be the qualities of us as a race, we missed the most important thing. Perseverance. We as humans evolved as creatures who could learn to adapt to any situation, no matter how harsh. We are a species of explorers, and we will meet many setbacks on the way to Mars. However, we can persevere. We, not as a nation but as humans, will not give up. Even faced with bitter losses such as Opportunity and Vikram 2, the human race will always persevere into the future.

For an extensive look at the contributions of Black Americans, you only have to travel as far as West Potomac High School.